The opportunities and challenges when recruiting architecture roles in the UAE 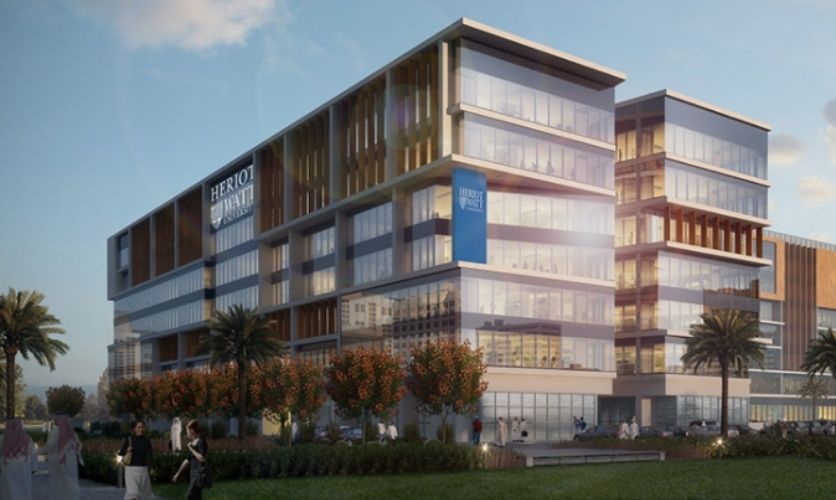 Image: BDP established its office in Abu Dhabi in 2010. The practice also works in Dubai, where it has been working on a new campus for Heriot-Watt University.

Traditionally when times are hard in the domestic job market, architects cast their eyes abroad. In the last few decades, this has often been to the United Arab Emirates (UAE) and in particular, the commercial and financial centre of Dubai. After the comparatively tough year that the UK has just had with Covid-19, it’s a fair bet that many will be tempted to look abroad, and in the direction of the Persian Gulf again.

The UAE may have fared far better than the UK with Covid – deaths per 100,000 were at 12.7 compared to 183 according to Johns Hopkins University (1 March), but like many countries, it is still dealing with renewed waves of infections.

As with most international markets, UAE experienced a major economic slow down during the pandemic, with the Institute of International Finance estimating that the economy contracted by 5.7% in 2020. Knight Frank put the figure even higher at 7.7%.

As a result, UAE, is no longer the hotspot of fast-paced construction it was 10 years ago. However, after the decline of 2020, Knight Frank forecasts an expansion in the economy of 4% by 2022. This is likely to be fuelled by the delayed Expo 2020, the first world Expo ever to take place in the region, which is now scheduled for 1 October 2021 to 31 March 2022. Twenty five million visitors and participants are expected to the event, which has themes of Opportunity, Mobility, Sustainability.

Another emerging growth area is the neighbouring Kingdom of Saudi Arabia, where a new focus on tourism is fuelling the hospitality and resort sector, and several practices already established in the Middle East are looking carefully at this new market for expansion. A visa scheme was launched in late 2019 for international tourists, and the kingdom hopes tourism can increase from 3-10% of GDP by 2030, with the potential for the creation of 1 million jobs in tourism.

It’s not just the 40°C heat that makes working as an architect in the Middle East remarkable. Despite the potential for a high standard of living and above-average salaries, working here will not be for everyone. For RIBA Chartered Practices in the UAE and the wider region, it’s important to be careful about recruiting the right personnel with the appropriate skills, knowledge, and approach to business. It is an asset, for instance, not only to be an Arabic speaker, but also to have a grip on international standards and to be used to working in a demanding client culture.

So how do practices go about hiring?

Practices in the UAE are finding that there is no shortage of available talent.

BDP established its 18-strong office in Abu Dhabi – the UAE capital and centre of the oil industry - in 2010 . The practice also works in Dubai, where it has been working on a new campus for Heriot-Watt University. While the office recently hired an associate from the UK, it generally looks to recruit locally from the UAE and wider MENA region for graduates and younger members of staff, according to BDP MENA director Gary Dicken.

‘There is a surplus of very talented people out there in the local market. We’ve been taking the opportunity to meet on an informal basis with talented individuals with a view to potentially hiring them when we are in a position to recruit,’ he says.

‘There’s a pretty close-knit community network so word-of-mouth plays a part. For more senior strategic roles we tend to look within our own firm or engage recruitment agencies.’

Securing visas was problematic at one point in the middle of last year, although Dicken says this has improved recently.

Sumaya Dabbagh, a UK-educated Saudi Arabian who established her practice Dabbagh Architects 10 years ago, looks for candidates with local/regional experience who also meet international standards in terms of training.

‘I prefer to have someone with some experience of the UAE as it can be quite a culture shock otherwise in terms of the ways that things are done, how planning works and all the regulations,’ she says.

Similarly, Jonathan Ashmore of Dubai-based practice Anarchitect looks for candidates with first-hand experience of the region and cultural sensitivity but who are also internationally minded.
‘We need quite strong, entrepreneurial and diverse characters including Arabic speakers and people from the region,’ he says.

‘We like to find people with an understanding of the culture and opportunities in the Middle East but who also have an understanding of international standards of work and design. For junior architects, we look to engage with some of the good local schools.’

However, given the current, still cautious market following Covid, he says the practice is likely to look for more professionally experienced staff capable of multi-tasking and managing various projects at different stages.

‘I believe resourcefulness and professionalism for us is now even more important as we require our staff to be more experienced and able to flexibly adapt to the new demands the industry is facing,’ he says.

UAE practices want staff who can embrace the particularly intensive nature of projects in the region.

‘It’s very intense. Demands from the client are quite high in terms of expectations of time frame and the number of revisions they want you to do,’ says Ashmore.

‘While we’re always looking for intelligent designers with a genuine appreciation of context and culture, the challenges here are different,’ adds BDP’s Gary Dicken. ‘Invariably we’re working to challenging deadlines. You have to be extremely efficient and get to the answers quickly. There’s no time to deliberate.’

Skill in handling client relationships is another important attribute.

‘There is a very fast pace to the work that we deliver in this region, and clients as ever are very demanding due to tight time scales,’ says Neil Serridge of Dubai-based Benoy.

For the right candidate, the rewards can be considerable.

‘The opportunity to work on really interesting projects is available here and I think that’s very exciting for a lot of young architects,’ says Sumaya Dabbagh, pointing to the varied workload of her own practice.

Candidates may also like the prospect of higher salaries, although these do go hand-in-hand with high living costs.

BDP’s Dicken points to the good quality of life on offer. ‘There’s no long commute, it’s very safe, and UAE is a tremendous hub for onward travel.’

And while it won’t be for everyone, there are certainly good prospects for architects in the UAE if, as Jonathan Ashmore puts it, you’re prepared ‘to take the rough with the smooth’.

‘It is a positively demanding environment,’ he says. ‘But it’s great because there’s also ambition, and you can get involved in projects that are genuinely exciting and dynamic and our architects actually get to see the projects being built and handed over.’

There has been a recent shift in the market in the region, with a diversification of opportunities both geographically and in terms of project type.

BDP’s Dicken expects Dubai, after a difficult 2020, to benefit from both the rescheduled Expo 2020 and a number of stimulus programmes linked to the 50th anniversary of the UAE in 2021. In March, the Central Bank of the United Arab Emirates also announced a stimulus package of $70 billion worth of capital and liquidity measures to accelerate economic recovery from the pandemic.

There are also increased opportunities in adaptive re-use projects in the UAE, according to Neil Serridge, who as senior associate director has headed up Benoy’s Dubai office for the last two years.

‘Dubai is maturing as a city. And we’re seeing a different approach now than just build, build, build, with more strategic development and a lot of repurposing,’ he says.

While the retail market in Dubai has become ‘over-saturated’ the practice is also seeing increased opportunities in North Africa and in particular in the Kingdom of Saudi Arabia, where Benoy is already working extensively on both city scale masterplans and mixed-use developments.

Here, growth away from a carbon-based economy is being driven by the Saudi Vision 2030 Framework. This is starting to gain traction with an opening up to tourism, hand-in hand with a changing dynamic in Saudi society. The experience of the recent pandemic is likely to only further heighten the importance of sustainable environmentally responsible lifestyles.

‘Should we be successful in opening our studio in Riyadh, and if project demands can justify personnel than we will hire – our employment strategy will be for a mix of local Saudi and international talent,’ says Serridge, adding that as Saudi clients particularly value ‘face time’ building a locally-based workforce will be more essential.

‘A lot of clients need to develop and act. There’s a lot of will in 2021 to get their projects moving forwards,’ says Serridge, adding that there’s considerable optimism in KSA at the moment.

Anarchitect recently won its first project in KSA (in Riyadh’s diplomatic quarter) and BDP is also interested in growing its presence in Saudi Arabia to meet an expansion in opportunities.

‘BDP have worked on an exciting portfolio of projects in KSA and are witnessing a transformative investment in infrastructure. There are some astonishing heritage and archaeological sites in the KSA and the kingdom is looking to capitalise on that – tourism is seen as a major growth area to address what is currently a predominantly carbon-based economy,’ says Dicken.

Tips on recruiting talent in the UAE