Developing a Future for the Architecture Profession in Ukraine: an interview with Oleg Drozdov 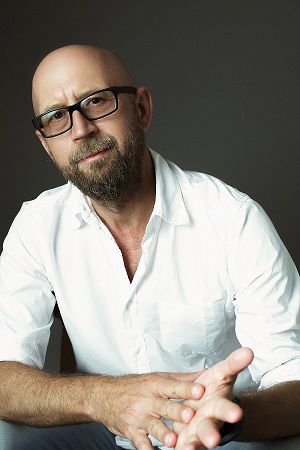 Oleg Drozdov is lead architect and founder of international practice Drozdov & Partners and co-founder of Kharkiv School of Architecture, the first independent architectural school in Ukraine. Here he tells Helen Castle what the situation has been like for students and architects since the Russian invasion and the steps that need to be taken to ensure professional knowledge and culture are in place for the country’s post-war reconstruction and redevelopment.

The situation in Ukraine is a complex and fragile one. Since its invasion by Russia, the population has experienced intense turmoil and upheaval, exposed to the terrors of war. Large-scale internal and external migration has taken place westwards. Oleg Drozdov is talking to me from Lviv, 90 kilometres from the Polish border, having relocated his family and the school some 1050 kilometres from Kharkiv, Ukraine’s second city, close to the Russian border. In March 2022, RIBA set up the Refugee Job Support scheme via RIBA Jobs to enable UK chartered practices to advertise free jobs and accommodation to Ukranian architects and students fleeing the conflict. While the east and south of Ukraine remains under increasing pressure from Russian bombings, plans are also starting to emerge for reconstruction. Most prominent of these is the invitation from the Mayor of Kharkiv to Norman Foster to draw up a new municipal masterplan. 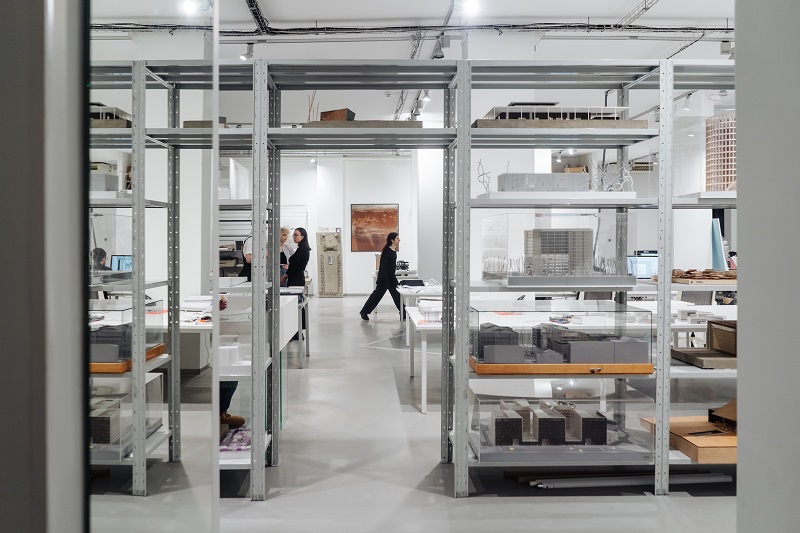 Photo the Drozdov & Partners’ office in Kharkiv, prior to the war in December 2021.

From the start of his career Oleg has proved a pioneering figure in Ukrainian architecture. In 1997, in response to the wave of investment in Ukraine after the collapse of Soviet Union and a new demand for architectural services, he formed Drozdov & Partners. In 2017, he co-founded the Kharkiv School of Architecture. He has recently established urban coalition Ro3kvit with a team of collaborators with expertise in planning, housing, energy, law, sociology and policy making, as well as architecture. All experts are required to have experience of working in Ukraine, whether compatriots or from overseas. Their objective being to design for ‘urgent needs in cities now’ and ‘connect this to future strategies’. Since the invasion, Oleg’s own office has executed a number of shelters in eastern and western Ukraine.

Oleg explains that the aim of Ro3kvit ‘as an international collaborative platform is to start activities for Ukraine’s future to form a potential committee of experts for government to draw on for future development. Ukraine has so many problems from previous times to address that require transformation – problems that originated in the late Soviet era. Overlaid on top of this is the huge problem of war. It's not just the demolition of towns, cities and villages. It’s also mental trauma. Populations in quite big areas have been affected. This is fresh trauma. It means that not many people are ready to go back to places, which were their previous homes. That’s how Ro3kvit is formulating its thinking, it’s starting by thinking about relocation. There are tensions there. You want to have your own future. But you also don’t want it.’

The Challenge for Architectural Educational in Ukraine

‘The gap in education and the curriculum in a Post-Soviet context in Ukraine has been important since the anti-colonial war, transforming the country from an intellectual colony of Russia is a significant part of the transformation.’ As the leader of an international practice, unable to recruit Ukrainian-educated staff at the level he would have liked, Oleg recognised an urgent need to change architectural education in the country. The provision of university education in Ukraine is low, as Drozdov frankly states ‘we’re not a well-educated nation’.

When Oleg co-founded the School of Architecture in Kharkiv five years ago, it was with the aim of laying the foundations for a world-class Ukrainian-based education that would participate in international discourse: ‘our main goal is to create a professional community, which is able to transform our cities. The ability to interact at the highest level internationally is a crucial quality of professional life. It is essential to be part of the discussion – to compete and collaborate.’

Oleg himself is Ukrainian educated. He graduated from Kharkiv University of Civil Engineering with a degree in architecture in 1990. The 1980s and 1990s, he describes it as an exciting period for architectural culture in Ukraine with a lot of partying and dedicated design workshops, which lasted a week or so. Overall, though, the design approach lacked structure: ‘There were many wise people, many talented people, but without methodology.’ During his early career, his own ambition and motivation to work at a higher level was boosted by interactions with the international community. As he explains: ‘At the first international workshop ‘Architecture Ambulance’ in Kharkiv, 17 years ago, we invited Europan and other guests. We have maintained friendly relationships with them ever since.’

The war has exasperated a brain drain of talented students and architects, which presents a significant stumbling block for Ukrainian-based practices and the country’s wider cultural and economic development. As Oleg describes: ‘During the last decade, the immigration of the best brains has created brutal competition. Some of the best students were lost to German schools, which opened Masters and undergraduate English programmes. This absorbed much of the talent from Ukraine, as on graduating they easily able to seek permission to stay and work in Germany.’

Before starting the Kharkiv School, Drozdov and his co-founders began seeking partnership and validation in Great Britain. However, as he explains, a solution was found closer to home: ‘After our revolution of 2014, new cabinet ministers came in and a Ministry of Education was formed by fantastic people. They started to reform education. So, we decided to seek Ukrainian validation. This made it possible to validate the programme that we wanted to develop.’ 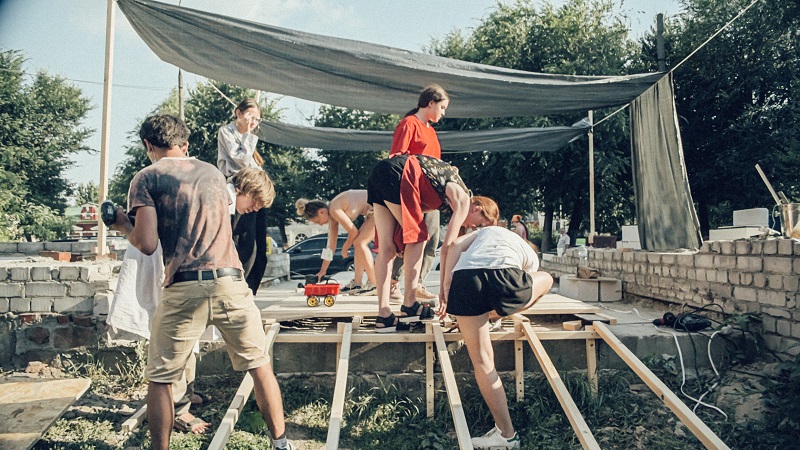 A group of students from Kharkiv School of Architecture building a project outdoors.

In 2020 the school was hard hit by the pandemic and associated financial problems. However, as Oleg says: ‘2021 provided a second departure point for the school. The school was completely reshaped. There were important shifts in the team, with the introduction of a super new motivated faculty, and programmes were recreated. There was a new generation of students with good results. A lot of energy was put into resolving financial problems. Donors contributed significant funding to the development of the school. A big grant was also awarded by a Ukrainian sweet manufacture for a new library, which they even selected RIBA books for.’

This was the year before the invasion of Ukraine.

The Invasion and the Evacuation of the Kharkiv School of Architecture

By early 2022, the school had reached a ‘fantastic moment, preparing for a new leap in its development’. Then ‘bad news arrived day by day. It was only 10 days before the war broke out in February that we understood that it was not a normal situation. We received training and advice from the National Guard’s instructors. They explained what to deal with in case of war. Anticipating behaviour – all kinds of things. There were two classes on medical considerations, from how to apply for medical insurance to dealing with elementary medical emergencies. A psychiatrist was also invited to come and talk.’

A week before war, Oleg and his team decided: ‘that the atmosphere had become so dangerous, it was necessary to switch the school online. We recommended to students that they return home to their families. The original intention was to rent a bus to transport them. But the plan had to be rethought because of the enormous traffic jams leaving the city on the first day of the attack. During the first month, students and faculty got spread out across the world, with only a few remaining in Kharkiv and the outlying areas.’

The level of Russian offensives directed at the city became untenable. Oleg left Kharkiv for Lviv with his wife, where his mother-in-law lives. A historic city, dating back to 13th century with a rich cultural life, Lviv is the largest city in Western Ukraine. Close to Poland, it also has the advantage as Oleg points out of being ‘one of the quietest militarily’.

After a month of continuing to deliver education online, the school was relocated to Lviv in temporary premises in the Ukrainian Catholic University. Shortly afterwards, Oleg and his team visited Lviv’s mayor at the city hall. A more permanent home at the Lviv Academy of Arts was proposed. It proved a perfect fit for Oleg and the school: ‘it is run by people with enormous energy who have absolutely the same values as us.’ Inward migration to Lviv placed a considerable pressure on accommodation, making it increasingly expensive and unaffordable for students. The host school, however, came to their rescue providing a dormitory in their community building, making it possible for the school of architecture’s students to move to the school’s new home. Most of the staff and students have now transferred to Lviv. 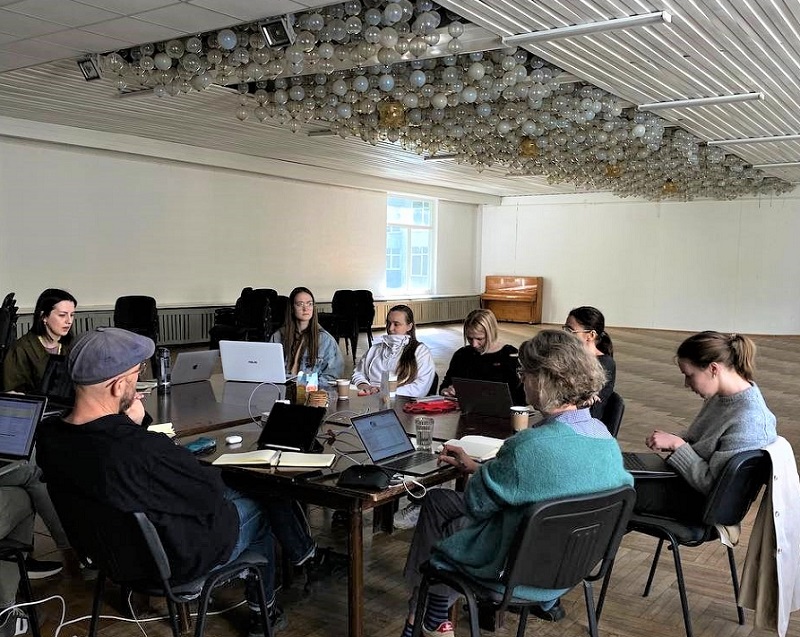 A meeting of the administrative team at the Kharkiv School of Architecture in its new premises at the Lviv Academy of Arts in western Ukraine.

There are about 40 students currently enrolled at the school. The school’s relatively small size is beneficial to its running. It is: ‘a really close knit community – a family. This gives us possibility to create a very integrated programme. The tutor of each course has the other opportunity to interact with other tutors and make sure what they deliver is complementary.’ The war, though, has taken its toll on students, as Oleg describes: ‘students in the oldest and youngest year groups are in a good place. It is, though, more apparent that students in the years between have had all kinds of problems affecting their motivation and mental health.’ A psychiatrist is involved in talking with the students. Oleg thinks that as many of half of them might require some kind of mental health support. The situation has recently been compounded by the confirmed death of a student who went missing some time ago near Kharkiv.

Looking to the Future

Oleg is keen to provide opportunities for Ukrainian students and architects to widen their horizons and create international connections. However, at the same time, there is the real threat during this period of war and uncertainty that a large portion of design professionals will sever ties for good with their homeland and opt for long-term immigration. Out of the 160 people who have ever worked in his office, 45 are now building their future careers abroad. The draw of overseas employment disrupts important work on the ground: ‘As an office we can employ people, maybe “steal” a little money and do a lot of work to provide shelter and do something for Ukraine now. This may also help to form a future. If schools and professionals do not remain in Ukraine, we will not have the human resources to rebuild the country.’

Having been exposed to the legacy of Soviet architecture, in which the design programme was imposed by an external power (almost 70% of buildings in Kharkiv were built during the Soviet era), Oleg believes passionately in a ‘human centric approach’. To realise high-quality architecture and urban design, ‘it means involving as many humans around you as possible’.

Offers have been provided by overseas universities to Oleg to relocate his students abroad, but his preference is to seek external long-term institutional support for the school to remain in the country. The lack of availability of practitioners for teaching purposes, though, makes academic teaching provision from countries like the UK essential. (In order to facilitate this, for four years the school has been taking steps towards RIBA validation.) At present, he is negotiating a long-term relationship with the University of Nottingham. He is also open to opportunities to work with UK practices in a collaborative capacity.

For further details of how you can support Kharkiv School of Architecture, see: https://kharkiv.school/en/pidtrymaty-hsha/